Tuscan Fattoria near Siena with 239 ha of land 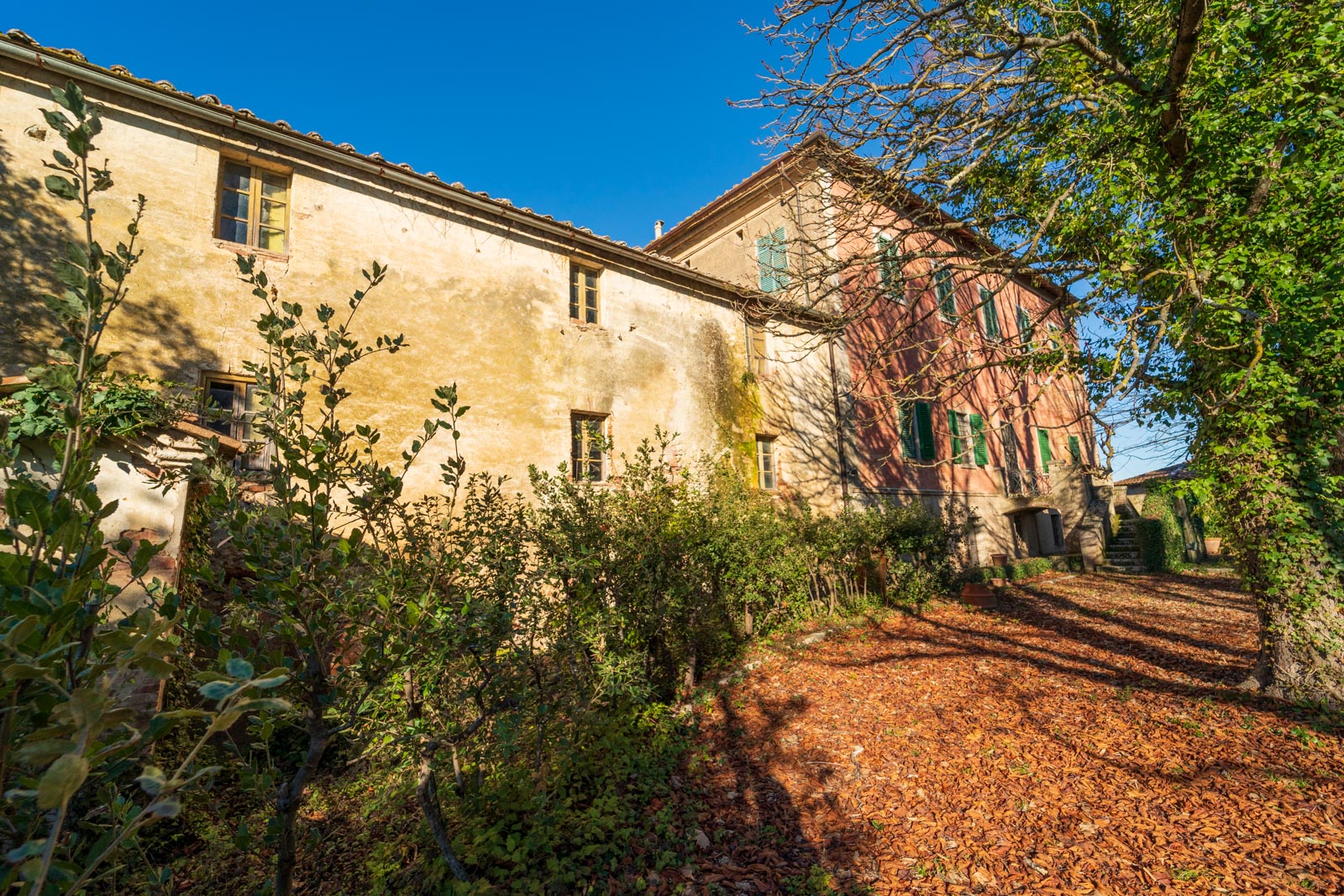 This is a classic Tuscan fattoria with agricultural operations in the countryside 12 km southwest of the centre of Siena. The buildings of the Fattoria consist of two separate groups of buildings: a) The FATTORIA with manor house, adjoining chapel and agricultural outbuildings were partly built by the well-known historical architect Agostino Fantastici (1782-1845). This part of the building consists of the manor house and the chapel, as well as the factor's house, now used as a storeroom, and other buildings that were used as warehouses, storerooms, sheds. b) On a hill in a quiet position 300 m from the manor house is a BORGO consisting of a 3-storey country house with outbuildings. The two residential floors of the country house were inhabited until a few years ago, the basement and the outbuildings need to be restored from scratch. FATTORIA: Villa 1.488 m²: This is a prestigious property in good condition, equipped with plumbing and electricity and partly with convector heating. Basement 105 m²: It consists of a single room, no longer used today, which served as a cellar for storing the wine produced by the fattoria in large wooden barrels. Access is via a staircase that leads to the rooms on the ground floor and also directly outside to the courtyard with the oven. It is connected to an electricity and water network. The ground floor (531 m²) consists of various rooms that were used as a bottling room, cellar, garages and storage rooms. It is accessible from the main entrance on the street as well as from two other entrances in the courtyard and garden. It is connected to electricity and water mains. 1st floor (426) m² with living, sleeping and working rooms. Spacious Tuscan kitchen with fireplace and dining area, six bedrooms, three of them with bathroom, bathroom, study, living room with fireplace, hallways, playroom. From the kitchen there is access to the large terrace with panoramic views. From here an external staircase leads to the courtyard where there are various outbuildings, the back of the chapel and the factor house. From the hall, an external staircase leads to the garden, where there is a brick well. The entire floor is equipped with an electricity, water and heating system with convector heating. The first floor (426 m²) consists of various rooms for living purposes with access via the interior staircase: living room with brick fireplace, three bedrooms, one of them with bathroom, bathroom, wardrobe. The other unused rooms, but in good condition, consist of three bedrooms, two rooms with wood-burning stoves and hallways. The entire floor is served by an electricity and water system; a convector heating system supplies the rooms in use. The chapel (72 m²) in neoclassical style was built in 1831 by Arch. Fantastici on behalf of the owner of the fattoria. The building is in a good state of conservation and is consecrated. The chapel has original sacred furnishings and a large painting on canvas depicting the martyrdom of Saint Sebastian. It is accessible both from the street and from inside through the sacristy. The House of the Factor (312 m²) extends over 3 floors of 104 m² each. It is a building attached to the villa and has its own entrance from the courtyard. The building, which is no longer in use, once served as the caretaker's residence and part of the ground floor with access to the courtyard was used as a cattle shed. An interior staircase leads to the upper floors, where the living quarters were located. There is a fireplace in the kitchen area. The remaining buildings (about 350 m²) served agricultural purposes (storage rooms, tractor shed, limonaia. BORGO: Not far from the manor house, on a hill in a quiet position, there is a group of houses consisting of a country house with outbuildings with the same structural characteristics. The main house of this borgo was inhabited until a few years ago. The outbuildings are to be restored from scratch. The 3-storey main house (390 m²) consists of a basement (130 m², to be restored), while the living part of the 1st and 2nd floor (130 m² each) is divided into a larger northern part (1st floor: entrance, large kitchen-living room with large fireplace, two bedrooms, bathroom; 2nd floor: living room with fireplace, kitchen, 3 bedrooms, bathroom) and a smaller southern part (1st floor: living room, kitchen with fireplace, bathroom; 2nd floor: 2 bedrooms). The building has electricity and water. The outbuildings (604 m²), which are no longer in use, without installations, were used for storage, sheds or warehouses. AGRICULTURAL LAND: The agricultural land of 239 ha is divided into arable land 54.5372 ha (of which 21.5387 ha irrigated), pastures 0.8961 ha, olives 1.6573 ha, olives/wine 1.0800 ha, wine 1.0696 ha, woodland 174.2188 ha, sweet chestnut 1.8950 ha.